One thing I learned over the years as an investor is that - as obvious as a company's growth story is sometimes - it usually takes analysts a few quarters to come around.

And even when they come around, it's usually only grudgingly so until a stock is much, much higher.

It's human nature. No one likes to stick their neck out too far until the ultimate measurement of "being right" - a higher stock price - is absolutely unmistakeable.

I think that's where we are with Moderna (MRNA). Watch the video or continue reading below!

Which means an investor needs to act sooner rather than later when faced with such an opportunity.

The stock had a huge run last year, gaining almost 500%. Moderna went from an obscure money-losing biotech to one of only a few drug firms that held the magic key to the coronavirus pandemic.

The pandemic is all but over, right? Time to sell the stock and move on to other ideas.

Many have done just that. The stock is only up about 45% this year after reaching a resistance level around $188 and then selling off each time.

Likewise, a few analysts have higher price targets around $230, but the average among the many analysts who cover this stock is basically right where the stock is now, at $166.

But a careful reader can see the tide of opinion beginning to change. For instance, the analyst at Piper Sandler took note this week that the health ministries of Japan and South Korea both approved Moderna's COVID vaccine of their populations.

That led the analyst to conclude "overseas approvals and orders are providing a second leg of mRNA-1273 revenue growth" at the same time that vaccination "proceeds full speed in America."

Yet the analyst only pegged the stock with a price target of $234, which is far too low in my opinion.

As I've noted a number of times earlier this year, this remains in my opinion a good spot to buy the shares if one did not own them (as I do).

I think the stock is destined to go much much higher from here. I think Moderna could be a $500-$600 stock by year end.

Both of those profit forecasts were raised dramatically since the start of the year.

If we divide either of those numbers into the current $165 price of the stock, we get price-earnings ratios that are far too low.

That's why I continue to state that Moderna's stock is undervalued and a great buy at current levels.

Don't wait for analysts - the folks who compile the profit forecasts - to tell you this.

For instance, the analyst at Needham wrote in a recent research note that, yes, Moderna "continues to impress" with its ability to execute "in all phases of the COVID vaccine program."

Yet the Needham analyst waffles and says he believes "COVID vaccine expectations are fully reflected in the stock price."

Really? For a company that's going to earn a combined $45 a share - or roughly $17 billion - in profits over the next couple of years?

Never mind that, as the company noted in April, it had 14 other vaccine candidates in various drug trial stages for afflictions as varied as cancer to the flu, and all based on the company's revolutionary mRNA drug development platform.

My point is that Moderna isn't a one trick pony and that once COVID-19 is defeated, it has no more profit potential to offer investors.

The way I see it, this is only the beginning.

Even if the COVID vaccine was the only thing Moderna ever produced, well - $17 billion in profits creates an awful lot of cash that the company can deploy toward stock buybacks and acquisitions.

This is the conundrum that investors face.

Analysts are on the fence about this stock. Could it really become a $300, $400, or $500 stock, they're asking themselves? No one wants to get too far out ahead of these things.

By the time they come around to affirmatively and publicly answering that question...

A company's stock price is usually much much higher.

Here's what I expect to happen with Moderna's stock in coming months. I think we'll see the stock continue to consolidate just below the alltime highs of $188.

Often, a stock - especially one that's already made a big move in a short time - has to challenge those resistance levels numerous times before traders feel confident enough that the stock can power through to a new alltime high price and keep going.

And usually at some point afterwards is when analysts finally start raising their price targets.

No one ever got rich waiting for Wall Street analysts to raise their price targets on a stock.

If you want to do well in the stock market, you need to get out in front  and own the stock long before analysts finally come around to a great growth story like Moderna.

I laid out my anticipated "double-bottom" move by the stock market in Monday's update [https://www.goodbuyreport.com/market-update-2/]. But
Jan 26, 2022
1 min read
Jan
25

The aftermath of Wednesday's announcement on interest rates, by the Federal Reserve, could serve as yet another inducement of more panic selling before we finally see a rally that can pull the market higher.
Jan 25, 2022
1 min read
Jan
23

Market Update: "Tradeable" Bottom is Near

At this point, let's just say I think there's a strong odds for tradeable rally soon, especially once we get past the upcoming Federal Reserve meeting this Tuesday and Wednesday.
Jan 23, 2022
7 min read
Jan
19 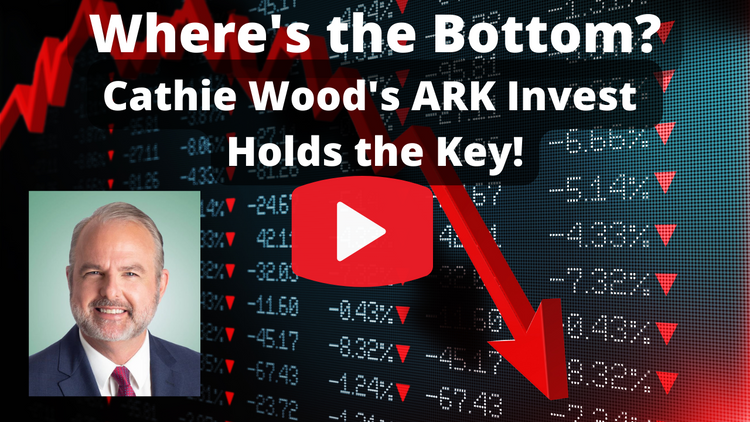 The stock market has been selling off for days now. The question everyone wants to know...where is the bottom?
Jan 19, 2022
1 min read
Jan
17

I hope you're enjoying MLK Day! The markets never sleep - certainly the Bitcoin market does not. Prices are approaching
Jan 17, 2022
1 min read